Zacchaeus stood there and said to the Lord, ‘Look, half of my possessions, Lord, I will give to the poor; and if I have defrauded anyone of anything, I will pay back four times as much.’ Then Jesus said to him, ‘Today salvation has come to this house, because he too is a son of Abraham. For the Son of Man came to seek out and to save the lost.’ 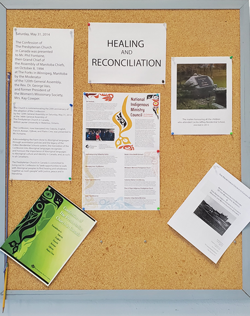 Zacchaeus was overjoyed. Jesus, whom he had heard about and wanted to take a glimpse of, stopped. Not only did Jesus stop at the very tree he climbed on, but also called him by his own name. This Jesus knew him before Zacchaeus was introduced. Being called is already an incredible acknowledgement of Zacchaeus who was very conscious of his own sins, but also has been known as a sinner and a Roman lackey. Yet, this Jesus did not seem to care. Jesus told him that he was coming to sup with him at his own house.

Being recognized by Jesus and was given an opportunity to host this teacher, Zacchaeus proclaimed his great joy of salvation by committing to repair his relationship with those who were poor and whom he defrauded, half of his possessions to the poor and four times of reparation to those whom he defrauded.

Healing and Reconciliation is more than a slogan made up of a few words so that we can utter whenever the history of Residential Schools is brought up. It is our church’s commitment to repairing our relationship with those whom we have hurt with or without good intentions. Zacchaeus knew instinctively to restore his relationship with those whom he defrauded. His declaration of four times is not as crucial as his willingness to make right the wrongs. Like Zacchaeus our response of walking with Jesus at Jesus’ invitation is to do the same, not because the indigenous people asked for it, but because in God’s mercy we know it is the right thing to do. 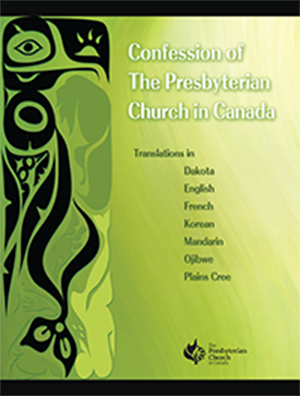 Lent is the time of confession. We look inward to examine what we have done in our past wrongly. This self-reflection is a crucial part of our being as the followers of Jesus, who died for our sins.

This year we are focusing on our past as The Presbyterian Church in Canada. As you have been hearing on the news, our indigenous brothers and sisters are in the Vatican meeting with the pope this week. The talk is whether the pope will apologise or continue to keep silent.

The Presbyterian Church in Canada adopted the confession, stating our wrongs and declaring our responsibility for the wrongs of the Residential School at the 120th General Assembly in 1994. One of the schools we were responsible for was at Birtle, Manitoba. This confession was presented to Mr. Phil Fontaine, then Grand Chief of the Assembly of Manitoba Chiefs on October 8, 1994.

It begins with, “The Holy Spirit speaking in and through Scripture, calls The Presbyterian Church in Canada to confession. This confession is our response to the word of God. We understand our mission and ministry in new ways in part because of the testimony of Aboriginal peoples,” and has 7 points. Today, we will look at points 1 and 7.

1. We, the 120th General Assembly of The Presbyterian Church in Canada, seeking the guidance of the Spirit of God, and aware of our own sin and shortcomings, are called to speak to the Church we love. We do this, out of new understandings of our past not out of any sense of being superior to those who have gone before us, nor out of any sense that we would have done things differently in the same context. It is with humility and in great sorrow that we come before God and our Aboriginal brothers and sisters with our confession.

7. We ask, also, for forgiveness from Aboriginal peoples. What we have heard we acknowledge. It is our hope that those whom we have wronged with a hurt too deep for telling will accept what we have to say. With God’s guidance our Church will seek opportunities to walk with Aboriginal peoples to find healing and wholeness together as God’s people. 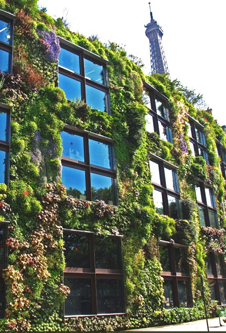 In Paris, one of the ways they chose to bring nature into the city was to plant vertical gardens. Here the Quai Branly Museum’s outside wall has been growing plants for many years now. Gardens, it turns out, do not need to be flat on the ground. Indeed, many architects are now incorporating indoor vertical wall gardens into their houses.

Up until now, much of our way of thinking has revolved around worship services and a few activities like Sunday schools, Bible studies, fellowship dinners, and concerts. Much of the time church facilities are either rented out or simply sit empty during the weekdays.

For many years now, we have been using our facilities as part of our mission resources. Yes, we have been doing missions by letting community groups use our facilities at very minimal cost. Remember Chinese dancers, Cooking Club, ProjectShare workshops, and others? We host Narcotics Anonymous meetings, St. John’s Ambulance workshops, Alzheimer Support groups, and so on.

A group got together about four years ago and began discussing what we could be like. The discussions ended with a proposal to turn our church into a community centre where people could gather. We are still working on it. In the meantime, we have been praying and searching for a new way to be a church, witnessing and sharing the Gospel of Jesus and being the Spirit filled community of Christ.

What new things are we imagining?

As a starter, we will be working on setting up a group that will become the nucleus of a new and different church. This church may or may not come together on Sunday mornings. Indeed, they may gather for worship on Friday evenings or Saturday afternoons. It will be when people can come together. This church will be different in that it may not worship like we do on Sunday morning at 10:30 am. They will certainly worship, but in ways that express their faith. Think of this new church as a church that will interest your grandchildren. So we need your prayers. We need your spiritual support. It will take a lot of your prayers to make this church possible. 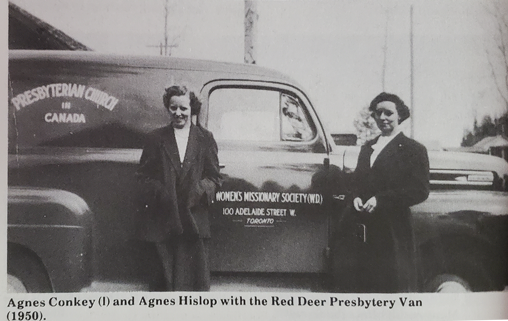 Thinking Back to Think Forward

In 2005 at the General Assembly in Edmonton, I was having a not so good time. Things were not going well with a motion I put on the floor. In the middle of the day I received a note that someone wanted to see me. Agnes Hislop, pictured on the right, wanted to see me. Initially the name did not click. Apparently she came all the way from Red Deer to Edmonton just to see me. "For what?" I wondered.

There was a frail lady in an empty room. Agnes! She and I met In Guyana in 1985. She came as one of Canadian Presbyterian delegates to help Guyana Presbyterian Church celebrate their 100th birthday. She and I had a brief conversation here and there. She saw my name on the list of the Assembly Commissioners and came to see me. I knew she served in India. She was independent and very funky and full of life then. She retired and had been enjoying her retirement.

In February this year, as I was thinking about the work of the Women's Missionary Society, I remembered Agnes and tried to find out where she would be. I found a very brief obituary stating Agnes died in 2008.

Agnes was one of those nameless servants who were called in early age. She graduated from Ewart College and served the Lord and the Church without getting married. This picture from 1950 shows she was working in Red Deer Presbytery. Back then, they already were doing ministries of outreach with the van provided by The PCC. Reading through the kinds of ministries they did opens our eyes to the vibrant ministries that the Church carried out in those days. They had so many innovative ministries that we no longer do on the account of the lack of money. Agnes eventually went to India in the early 1960s and served there until her retirement. She gave her all in serving God and God’s people.

I have been counting God’s blessings at Drummond Hill. With dedicated servants, who are like Agnes in faith, many are participating in God’s mission. As we continue to form new ministries, we are standing on the shoulders of these wonderful servants who already laid the foundation so that we can do things boldly and bravely in faith. Agnes and her peers tried and did everything we are planning to do as something new. Isn’t this great? In Christ, there is nothing new. We are finding that Christ has already been helping the Church to be ever new in him.